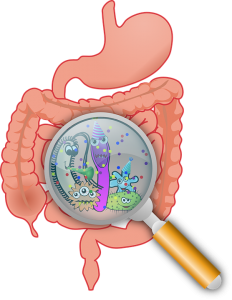 Nowadays, science verifies more and more this old proverb. Indeed, we begin to realize the enormous influence that our food has on our physical and mental health, on our feelings and our way of thinking.

Why? Because the food we gulp down has contact with our digestive system, which is a kind of … a second brain. That could sound strange, but sometimes reality does: not only our digestive system contains neurons, but it contains nothing less than 100 milliards of them1! Connected between them and also with the brain, the one which stands in the head, via the vagus nerve, of which between 80 % and 90 % of fibers are none-reciprocal, and let information pass from the stomach (in particular the small intestine, around which it is rolled up) to the brain2. So it is our digestive system which tells our brain how to behave, and not the opposite!

We thus very well understand that what we eat influences our digestive system, and thus our brain: our feelings, our reflections, etc.

Furthermore, our food also has a direct effect on our intestinal flora, these 100000 billion of small bacteria which develop in our digestive system. But this intestinal flora, which has a very important effect on our body, depends naturally on our food. And from its composition can ensue cardiovascular risks4, anxiety and dépression2, autism4, obesity4, neurological diseases (as the Parkinson’s disease5), diabetes4, cancer4, as well as disorders in our hormonal and immune systems 2.

These discoveries are a real revolution: they actually allow to envisage in the future to handle a lot of complex diseases simply by modifying the intestinal flora of the sick person, using for example antibiotics or probiotics.

Well, as prevention is better than cure, pay attention on what you eat! 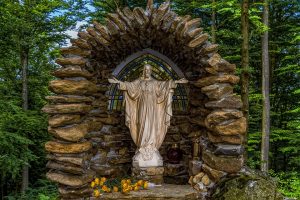 Hi Neurohackers! Previously we saw a cool introduction to the powers of music. Here is another one about applications of the concept!

Social applications are unlimited: we find of course the track of music in every religion, where texts must be precisely memorized, and where the rites referred to magic stuff. We know moreover from now on that this phenomenon was already present during prehistoric areas! Cro-Magnon men preferred the caves having the best acoustic properties and we found in the cave of Portel (Ariège, France), a testimony of this statement: two red points were drawn on the ceiling, and by standing between both, if we speak, the echo of the cave sends us back our voice “transformed”, “hollow”, “as if we were communicated with the spirit of the cave” according to the suggestion of Michel Dauvois.1 Thus we know that sounds and voices in particular has always been associated always to the divine world.

We still understand the interest of the military fanfare: it generates a protection bubble of sound, preventing the sounds of the enemy from reaching the troop, and thus let the men think that all is good so far! Furthermore, when we sing with the others, there is a form of “dissolution of the subject” into the population: everyone is an actor of his sound landscape, but he does not distinguish his voice from that of the others, if he sings in rhythm and in tune. And if it is the case, the impression of power is moreover multiplied tenfold (physical phenomenon of resonance). Thus we understand that we can generate a solid group spirit by this way.

The notion of ” sound landscape ” evoked above was created by Pierre Schaeffer (pioneer of the electronic music). It allows to bridge the gap between sound and music, by the means of ” the sound atmosphere “. If we saw that the psychology of man is modelled by the sound, we understand that his sound environment partially defines him… That is why the discipline of ” sound archaeology ” begins to be developed, trying to understand and then to reproduce the sound atmospheres of the past, and doing so trying to obtain information on the people who preceded us. But we also perceive here the ill-being of our time with all the problem of noise pollution…1

When we see the degree of importance that sound has for the man, we can finally raise the question: is sound essential to man’s development? Well, in fact, we notice that it is rather important for building himself: we saw in the first part of the article (lien html) that the sound connects the individual with the world which surrounds him, it erases the barrier which separates him from this one. Yet unsurprisingly, we know nowadays, that deafness has huge consequences on the development of psychomotor capacities of the children.2 In the same order of idea, we shall still note the use of ” the inner ear ” in the representation of the vertical posture for the individual

And finally, also interesting: the laboratories of Orfield, in Minneapolis, created, mainly for the NASA, a “anechoic room”. This place, said “anechoic” (without echo), absorbs 99,9 % of sounds. And we notice that to stay more than 45 minutes in such a chamber drives us crazy, because it breaks the balance between our inner physiological noises and the outer foreigner ones: the man is not made to hear only the beatings of his own heart!3 He is not alone in the universe, and maintains an intimate link with the outside world, a sound link.

And on these words ends this second part of article. But they say: all things come in threes! The next part and the end of this article is coming in the next episode.

3■ Article on the anechoic chambers