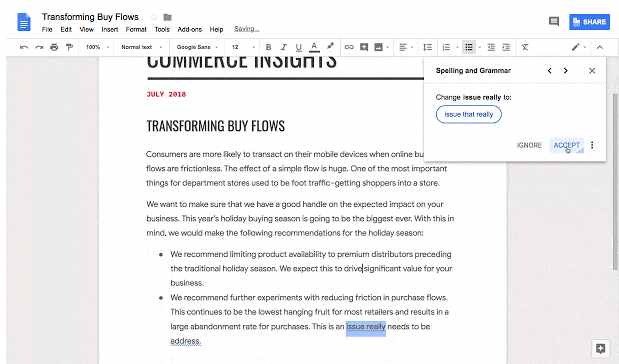 Google announced this summer an interesting update on Google Docs during the Google Cloud Next ’18 conference: from now on you will benefit from not only a spell-checker, but also a grammatical one! 1

The operation of the device is simple: when a possible grammatical mistake is detected, the portion of sentence is highlighted in blue. By right-clicking it, you can then accept one of the displayed proposals, or to refuse them all. You can also write your whole text and then correct all the faults using the “Tools” menu.2

We have to highlight there that if the result is as high as the expectations, it will be a huge progress in the field of natural language processing. Indeed, to build a spell-checker is not very complicated in itself: you just have to use a dictionary for that. If the program knows in which language you write (and computers manage to detect the dominant language of a document from its first written words), it loads the corresponding dictionary and compares all the words with this dictionary to know if what you write is correct or not. Well, OK, in practice, it is a little more complicated: it is necessary to be interested in the formal rules of agreement, but as these rules are formal, computers are rather good doing this job nowadays, as you can check by yourself using any office equipment.

But there, that goes farther: the detection of faults of structures in sentences requires that the machine has a good understanding of the language. Bye the bye, that’s the reason why Grammar Suggestions will use machine learning to progress. You can moreover volunteer to teach the program by making a request for Google and by using a beta version on Google Docs.3

At the end, when Grammar Suggestions will have grown up a little bit, it will write better than us…

3■ Take part in the tests 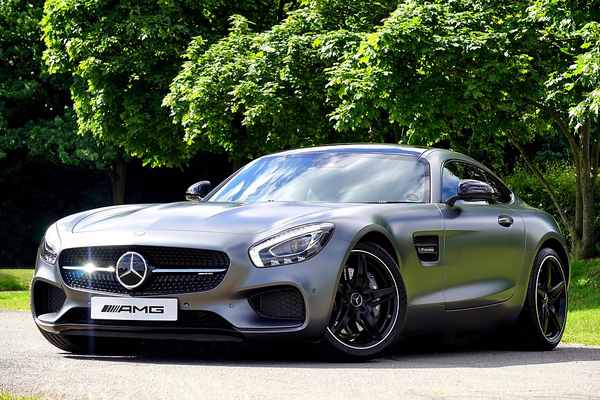 The results of a study1 led by Gideon Nave, professor in Wharton School of the University of Pennsylvania, showed that the testosterone’s rate influenced men purchases2.

The initial hypothesis, which has been confirmed by the results of the study, is that the male slumbering in us tries on one hand to attract the eye of the females in the vicinity (like the bird who shows his most beautiful plumage to be spotted by potential sexual partners) and on the other hand to discourage his potential rivals, which are the other males circulating in the surroundings … You know, like dogs which raise the leg to urinate as high as possible, just to persuade the others that they are very big and thus very sturdy!

Well, the idea is that with man, the brands of the products which he raises can play this role.

The idea of the study is rather direct: products of the same quality but with different brands of which the prestige is different were proposed to a group of 243 men from 18 to 55 years old, half of them having beforehand received a dose of testosterone, the others a dose of placebo. And, guess what, the men who took a dose of testosterone were more sensitive to the brand than the others!

Well, then of course, the experiment is finer than that (the prestigious level of the brands was estimated before the experiment by a poll, the saliva of the participants has been checked to see if other hormones did not influence the tests, they were forbidden to have a contact with a woman just before the examination etc.).

It is a remarkable result, isn’t it? In any case, it helps us to understand the advertisings for fragrances or cars which, rather than to speak to us of the product, prefer to show us images which make raise our testosterone’s rate!