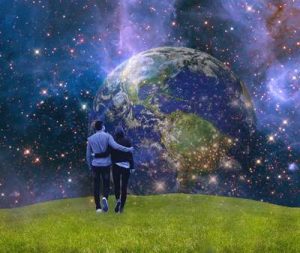 In 2017, scientists managed to observe and produce the loving mechanism to voles of prairies1. Before going further in this article, it is necessary to know that this species (Microtus ochrogaster) is curiously an excellent choice to model the human loving behavior. Indeed, voles look like us emotionally talking: they are monogamous but have sexual interactions with other partners than their other half, they become aggressive in the presence of other individuals of the same sex and depressed when they lose their partner. Furthermore, the prefrontal cortex of voles and humans can modify the behavior of the deep layers of the brain.

That’s what happens to the voles when they fall in love… and thus that’s probably what happens to us either in such a situation. The neuroscientists of the Emory University of Atlanta were able to observe that the loving feeling coincides, in the brain of voles, with the takeover of the accumbens core by the prefrontal cortex. In other words, the center of reflection and decision suddenly takes over the center of pleasure while the subject falls in love. It would thus be the intellect which would be at the origin of the Love feeling! And it would be it which would make us perceive the presence of our partner as a reward.

The same team was able to verify it: having introduced photoperceptible genes into certain neurons of a female, they put her in a cage with an unknown male (and they made sure to prevent any physical contact between them). Then they activated the neurons of the prefrontal cortex of the female with a frequency determined during preliminary phases of observation, before the experiment. Then they placed the female in an environment containing various males: in 10 cases out of 12, the female then preferred the male that was chosen by the scientists.

Even if this behavior are not directly transposable to a human (whose brain is more complex), this experiment lights us on the way we work. And, potentially, this knowledge can help us treating disorders as autism, which corresponds to a difficulty in creating social links.

In January, 2018, a chair of data sciences was opened at the Collège de France by Stéphane Mallat, French researcher who had worked out in 1987 an algorithm at the origin of the future JPEG2000 format before creating a start-up producing chips for TV which allowed to improve the resolution of the image (production of a high-resolution image from a standard signal), after which he interested himself in deep-learning algorithm for problems connected to the automatic recognition of images.

In an interview for the newspaper La recherche1, he explains the reasons of the creation of his chair at the Collège de France and gives indications onto the contents of the classes he gives.

For him, it was important that the name of chair was ” Data Sciences ” with the plural form because it is a multidisciplinary field of research. Indeed, although the used tools are always the same (applied mathematics, IT mathematics and IA, information theory etc.), the handled sets of data concern any sorts of sciences (physics, biology, cognitive sciences, economy, social sciences, etc.). Yet each of these sciences have their own approach to the problem of big data, what makes it a massively multidisciplinary domain. Moreover, Stéphane Mallat supports that the emergence of this discipline is not due to a scientific necessity, but rather to a social and university pressure, because these methods are deeply revolutionizing our societies (like chairs of computer science were imperative in universities, fifty years earlier). In fact, the actual pressure is such as Stéphane Mallat works at present on the opening of another chair of data sciences at the Ecole Normale Supérieure (a French school to form searchers). As a result, and as the domain just begins to crystallize, the main objective of his chair at the Collège de France will be to create a common vocabulary for all the concerned scientific disciplines, to describe problems connected to large-dimension data. In other words, to put the bases of this new science by creating a new vocabulary.

Historically, if we want to understand where from comes this emergent domain, it is because of the accumulation of the data and the increase of the computing power that the applied math and the computer science met to give birth to machine learning. Because historically, we were first capable of storing a large amount of data, before knowing what we could do with it. Globally, the data sciences are used to reach two types of objectives: the modelling of a set of data (to generate new data, compress data, reconstruct or improve the quality of an image etc.) and the prediction (which consists in giving meaning to a set of data). At present, deep learning techniques work well for these uses, but we fail to understand why. Thus it is a whole domain of research to understand this, in order to make them more reliable for critical applications such as medical diagnosis or autonomous cars. Other areas of research concern the reduction of the number of dimensions of the problems by discovering and using multi-scales hierarchies (observation of the data with various scales) and symmetries (invariances) in the handled set of data.

And because we have on one hand data warehouses and on the other hand quite an arsenal of applied math to use, one of the distinctive characteristics of this domain is that it is at the same time theoretical and experimental. It is indeed, according to Stéphane Mallat, from empirical approaches and remarkable intuitions of several researchers and engineers that were born the recent and sudden progress we know in the techniques of visual and vocal recognition, machine translation or still in Go and chess games. And it is for him the experimental search in this domain which brings to the foreground new mathematical problems; and that is why this correspondence between math and application is at the heart of his classes.