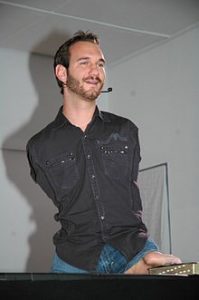 “Nick” (Nicholas James) Vujicic was born without arms nor legs in 1982 in Melbourne (however he has two feet, one of which with two toes). He is the director of Life Without Limbs2, a Christian non-profit organization dedicated to the people living with a handicap. He is requested in particular by the American schools to intervene in public awareness campaigns on the tyranny of the other people’s opinion and the persecution of certain children by their schoolmates1.

What’s impressive with Nick is his energy and love of life… and that’s just STUPEFYING! When we know that he almost committed suicide when he was 8 years old and that he inspires now a lot of people, that’s impelling!

Just imagine as life can be complicated when we have no limbs. Everything becomes a challenge! Nick had to learn how to brush his teeth with his feet! And also to type despite his handicap … Besides, he is an accounting and financial planning graduate. In brief, he’s a man who not only succeeded to integrate socially in spite of his enormous handicap, but moreover who contributes to improve society via the association he created!

With his association, he travels the world to give conferences, in particular at le Havre (France) in 20173 in which he talks about his life, his questionings, his doubts and his hopes, and what allowed him to move forward, not to lose heart during harsh times. Among others, he explains that his parents always taught to him to be grateful “for what life had given him”. He also explains that it is to see a newspaper article showing a man facing a severe handicap that made him perceive the others’ pain1. Finally, he tells that he realized that the others also were attentive to his efforts and that he was de facto a source of inspiration, of motivation for them1.

Nick also has a Facebook page, which allows him to pursue the work of his association4. He is the author of several books (see below).

The last thing we’ll say in this article is Nick’s main message: say to yourself that if HE was able to overcome his handicap so much that he transformed it into an asset to meet an exceptional fate, YOU are able to face the difficulties you encounter in your life!

One Reply to “Motivation – Beyond the limits”