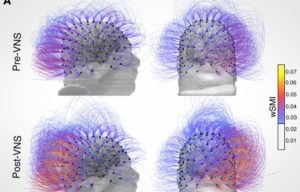 …But He’s Not Awake Yet.

Reviving unresponsive patients has long been a dream of humanity, and an oft-talked about part of the human condition.

A French patient received a traumatic brain injury fifteen years ago, putting him into a vegetative state. After stimulating a part of the brain, scientists were seemingly able to restore some of the patients’ consciousness. But no, we’re not quite at Awakenings yet.

A vegetative state is not a coma. Instead, the brain-damaged patient is awake but unaware and conscious-less. A paper in BMC Medicine describes the condition as “only showing reflex movements without response to command.” Put very simply, researchers are pretty sure the condition has something to do with brain damage altering how electrical signals travel between the inner and outer sections of the brain, as well as around the outer layer. Some patients recover from vegetative states, but others don’t.
The scientists hypothesized that perhaps stimulating the vagus nerve, the longest nerve connected directly to the brain, would help rewire parts of the brain and allow for higher levels of consciousness. They implanted a stimulator to the nerve and applied a current, slowly ramping it up over a month. Afterwards, they noticed the patient had increased brain activity and observed him move from the vegetative to a minimally conscious state—as one paper describes, “a condition of severely altered consciousness in which minimal but definite behavioral evidence of self or environmental awareness is demonstrated.”