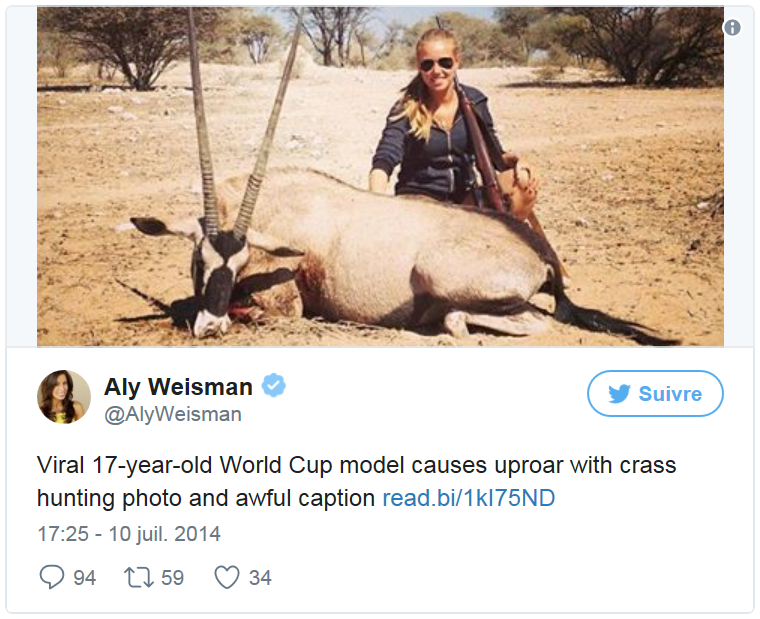 Axelle loses her job in L’Oréal, or how big data and social networks catch you up!

There are numerous similar cases. We cannot list all of them here, but we chose this one which is a little bit old on purpose, so it lets you imagine what can happen nowadays as the social networks have grown. Then remember that all that you publish on social networks stays on the Internet (despite you erased the content).

Axelle Despiegelaere, 17-year-old student, had got a contract with Professional L’Oréal to realize beauty tutorial videos.

But meanwhile, Axelle published on her Facebook page a photo of her, large smile, next to the corpse of an oryx, a rifle against her shoulder. The following legend accompanied the cliché: “To hunt is not only a question of life or death. It is more than that … This was one year ago, but today, I am ready to hunt Americans, hahaha”. The young woman posted this image just before a match between Belgium and the United States. Nowadays she has erased the image and deleted her Facebook page.

At that time, the Internet community felt deeply outraged by the photography published on the social networks. Axelle tried to calm things down by declaring “I did not want to offend anyone … it was a joke. Thank you for your understanding.” But too late: Professionnal L’Oréal Belgium immediately reacted by declaring in the newspaper ” The Independant ” that the video realized with Axelle would be the first one and the last one.